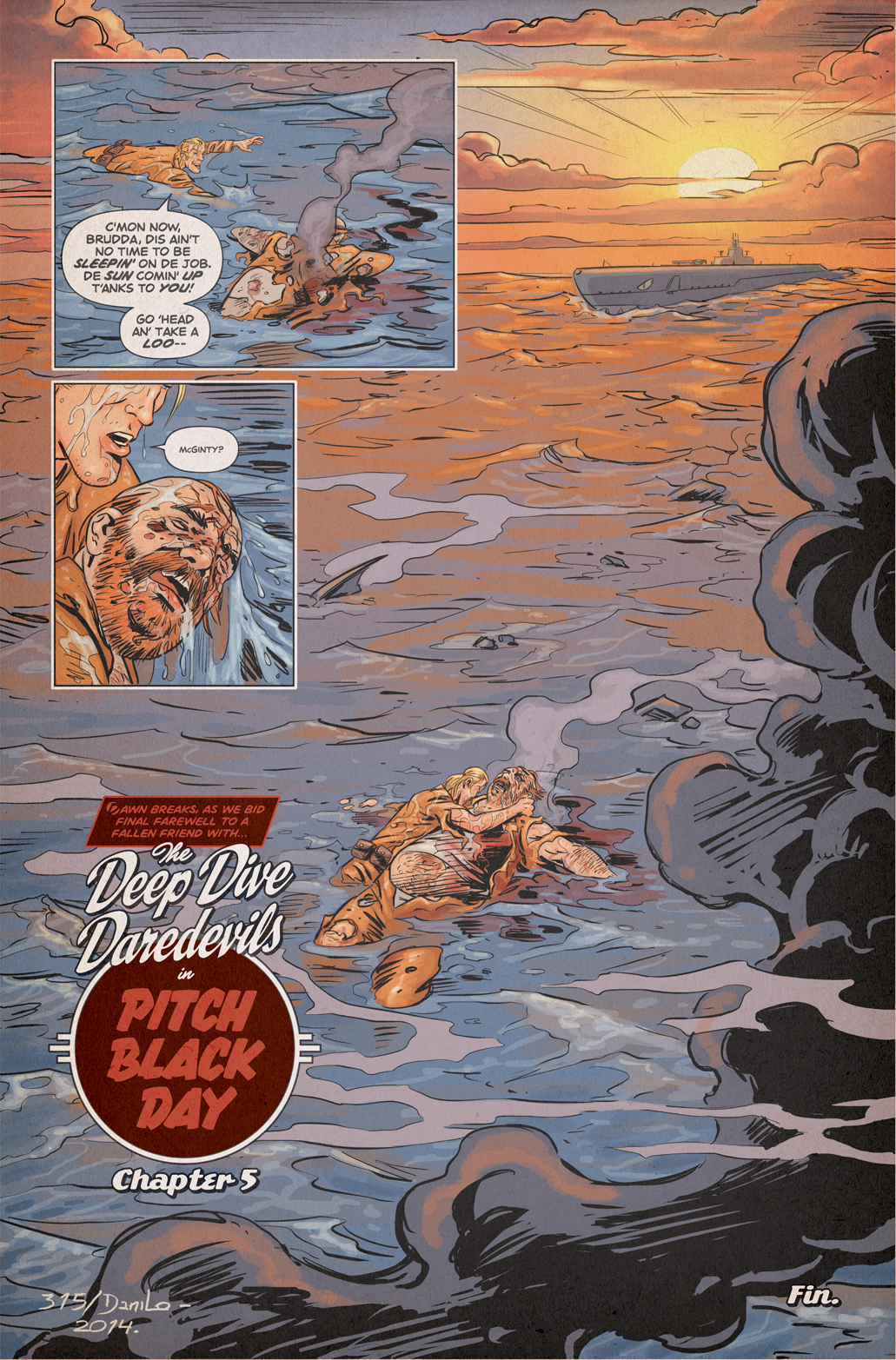 This is the end…my only friend, the end.

As one of the writers, naturally, I’ve known this moment was coming for a long time. Heck, I’ve even had this page scripted, drawn, colored, lettered, and aged sitting in my inbox for over a month. Regardless of all that though, sitting here now trying to find something to write about McGinty’s death, I’m still struck with a palpable twinge of SADNESS.

As I’ve pointed out before, McGinty and Deveraux’s entire existence in the first place is one big happy accident. After we finished the first 8 pages of the first DDD story, Secret of the Beaufort Sea, it was a few months before we started production on the rest of the story. In the interim, Danilo mentioned that he had become fond of a couple of the “background” crewman he had drawn into the first 8 pages – the big red-head and the slightly smarmy looking guy with the bandana. He asked if it was possible to work them into the story in more prominent roles. Immediately, our imaginations were off to the races making up personalities and back-stories for Danilo’s creations. We decided that they would be best friends, a couple of scoundrels, each with a nearly unintelligible regional accent. In short, the comic relief – our versions of Artoo and Threepio (I’ll let you guys decide which is which). Over the course of three stories and nearly 100 pages, they’ve slowly moved from the background and into the forefront, and now it is their story and their friendship that forms the emotional core of Pitch Black Day.

Underneath all the action, horror, and shenanigans one of the big themes of PBD is the power of FRIENDSHIP. It’s a theme close to our hearts, as it is life-long friendships that form the core of The ThreeOneFive. Early in the story McGinty and Joe throw caution to the wind and risk everything to go on what amounts to a suicide mission to save their friends. In the end, Joe was able to save Doc and earned a happy reunion. Unfortunately, the boys in orange were not so lucky. When he destroyed Dracula’s rocket, McGinty saved his friend from the stain of being culpable in mass murder. He saved Deveraux’s soul, but in doing so he paid the ultimate price. It is just about the most heroic death one could muster…not that it is any consolation to Deveraux.

Rest in Peace, McGinty. You will be missed.

Speaking of being missed, I’m sorry to say it but this will be the last DDD page by Danilo Guida for a while. Danilo has another commitment to see through and consequently he will not be available to draw more DDD adventures until 2015. Fear not though, in the meantime we’ll all be in the very capable hands of his friend, Smilton Roa Klaassen, the sensational artist of The Cajun Caper. Anyway…

Danilo – Thank you, my friend, for all of your phenomenal work up to this point. Never forget that you are the heart and soul of the Deep Dive Daredevils, and while you are away make sure to keep your pencil sharpened because we have BIG plans for your homecoming in 2015!

Welp, in honor of McGinty there will be no shilling this week, but I think it goes without saying, make sure to stop by NEXT WEEK for the EPILOGUE to Pitch Black Day.