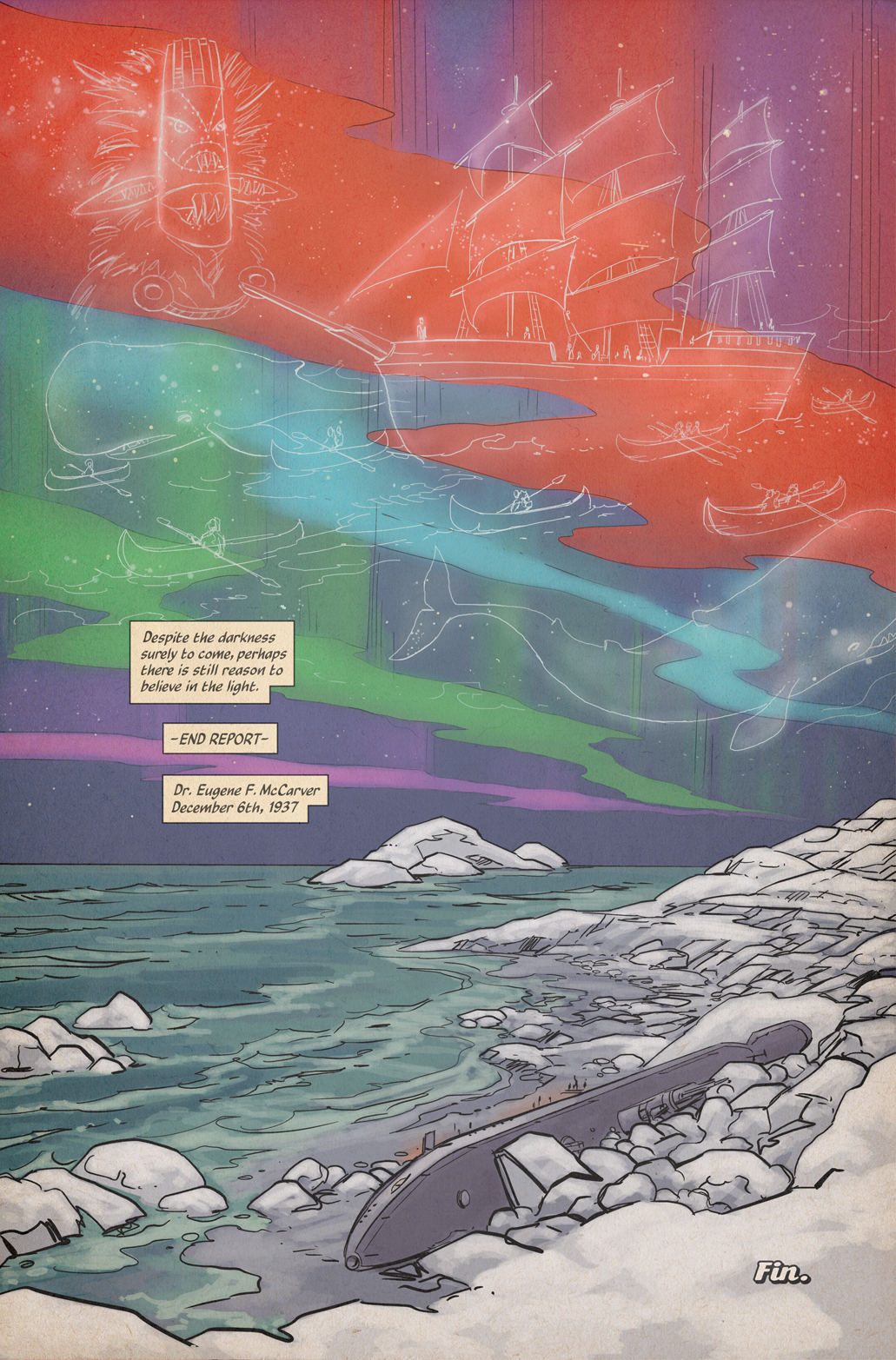 Secret of the Beaufort Sea – Page 40

Secret of the Beaufort is a wrap!

It’s a fantastic feeling to be here at the final page of the first Deep Dive Daredevils adventure, and also a little bittersweet at the same time. This is a story that we began work on over two years ago, and a day hasn’t gone by since then when it hasn’t been worked on in some fashion. It’s been a labor of love for all of us!

But, better than JUST being here at the conclusion, I can objectively say that this story turned out better than any of us imagined at the beginning. Dan, Evin, and I have grown as writers over the telling. Danilo Guida has delivered award worthy artwork, and somehow continued to top himself at regular intervals. Steven Finch’s clear vision behind the lettering and design make the book read like a dream right out of the Golden Age of comics. And, all of it was done, on time, without cutting any corners. Pat yourselves on the back, fellas.

As we say goodbye to The Secret of the Beaufort Sea, remember that it is only the BEGINNING! Joe and Cup, Doc, Captain Custer, and the rest of the Daredevils aren’t going anywhere…

With that in mind, lets take a look at the upcoming schedule:

Tuesday December 18th – We’ll be taking a break, the first since our launch on April 17th.  No content.

Tuesday December 25th – Originally, this was planned as a week with no content, as well, but because all of the Daredevilers out there have been such good boys and girls there will be a present waiting for you on the blotter Christmas morning! It’s the least we can do to say THANKS…

Tuesday January 1st 2013 – The first day of a NEW YEAR calls for the first look at a NEW STORY! The cover for the Cajun Caper will hit the blotter!

Tuesday January 8th 2013 – Guest artist Smilton Roa Klaassen joins us for the FIRST PAGE of a sensational Deep Dive Daredevils short we’re calling the Cajun Caper! It’ll run for 10 weeks, and is packed with as much adventure and heart as is allowed by law. Seriously, this little story packs a wallop! The last page has a reveal that will leave heads spinning. Mark my words.

On the Horizon – While the Cajun Caper is on center-stage, Danilo will be hard at work in the wings on the next full-length Deep Dive Daredevils story, PITCH BLACK DAY! Steel yourselves, Daredevilers, for the HORRORS that wait in the abyss will scare the daylights out of you!

Welp, that what’s coming…in the meantime, let us know your thoughts about Secret of the Beaufort Sea now that all is said and done. And, if you haven’t already, it’s more important than ever to RSS, Like, or Follow so you can keep up to date on all things Deep Dive Daredevils.

Many thanks to all our readers, everyone who’s supported us, and all those who’ve helped spread the word!

See you soon, guys. The best is yet to come!