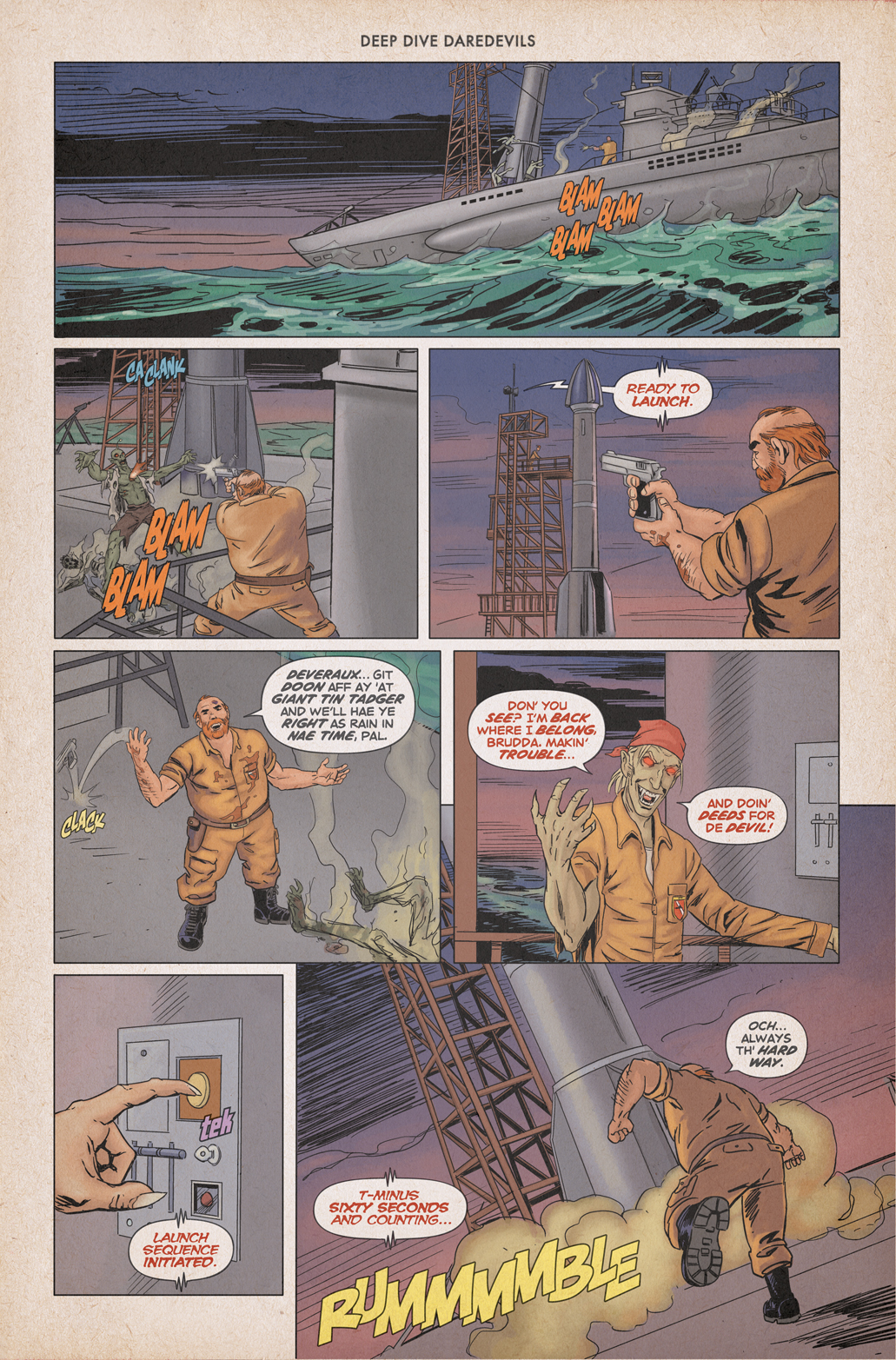 The final countdown (sorry, I couldn’t resist) to the The Pitch Black Day Rocket’s launch has begun and all that stands between the EARTH and ETERNAL DARKNESS is a burly Scotsman named Sean McGinty. Before he can even hope to stop the rocket though, he’ll have to go through his brother-in-arms/best-friend-turned-evil, Tayaut Deveraux. Prepare yourselves for high drama in the coming weeks, Daredevilers, as we pit BROTHER against BROTHER with the fate of the world in the balance!

I still can’t get over how satisfying it is that two characters who started out as “comic relief” background players have moved into the forefront of the story. Now, an integral element of PBD’s plot hinges on these characters, but perhaps the bigger drama is whether or not their friendship can survive their clash on the deck of Dracula’s submarine. In the end, all this goodness is thanks to Danilo, who designed two characters that begged to come out of the shadows and become a meaningful part of the cast. That’s the beauty of the collaborative nature of comics, and a big part of what makes the Daredevils so damn fun to put together with Danilo week-in and week-out.

Be here NEXT WEEK when the TENSION ratchets ten-fold, as we begin the build-up the to the conclusion of Pitch Black Day! In just 7 days the stage is set and all the players move into their final positions on the board. You’ve come this far, don’t get left behind NOW – make sure to RSS, Like, or Follow !

And, now the moment you’ve all been waiting for… WE HAVE A WINNER in the epic sweepstakes to name the Custer’s S.E.A. Drive! Drum roll please. And, the winner is…

Miserchord, with his entry, SONICALLY ENHANCED ACCELERATION! Actually, we are going to tweak it slightly to, Sonically Enhanced Accelerator…but, close enough, right? Here is Miserchord’s description of the S.E.A. Drive:

“Each of the cylinders holds a focused cavity speaker, together they create a directional thrust in the pod. Works great in water, due the relatively high mass of water, only produces a gentle breeze in air, making the system useless for aircraft.”

Many thanks to Miserchord for contributing to the Deep Dive Daredevils mythos, and to everyone else who took the time to contribute to our first reader participation thing-a-mabob! It was a heck of a lot of fun to see all the guesses come in over the last week, and really cool to see some new screen names pop-up in the comments section. Rest assured, this won”t be the last reader participation event…not by a longshot!

Welp, time to pack it in. As always, make sure to check out what must be one of webcomicdom’s most eclectic blogs, the Sunday Bonus Lunch.