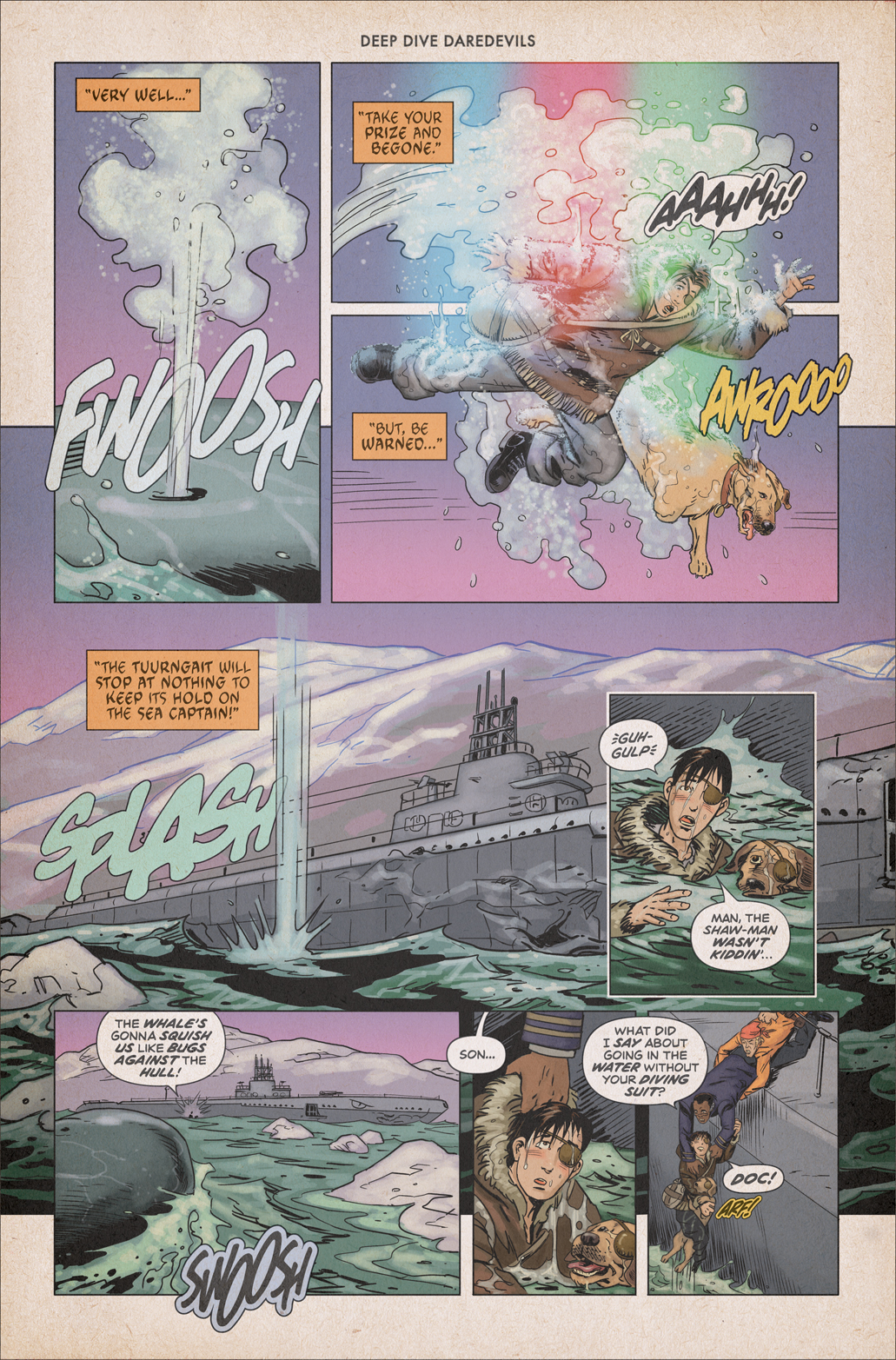 Secret of the Beaufort Sea – Page 34

Man, I love panels 2 and 3 – Joe and Cup materializing out of the water spout from the whale’s blowhole is amazing! The script only called for Joe and Cup to be expelled from the blowhole, but Danilo added the Aurora Borealis light and made it a truly epic, eye-catching moment…

In fact, when I first saw this page’s finished colors it reminded me of a certain passage from Herman Melville’s Moby Dick*:

From Chapter 51, The Spirit-Spout – “It was while gliding through these latter waters that one serene and moonlight night, when all the waves rolled by like scrolls of silver; and, by their soft, suffusing seethings, made what seemed a silvery silence, not a solitude; on such a silent night a silvery jet was seen far in advance of the white bubbles at the bow. Lit up by the moon, it looked celestial; seemed some plumed and glittering god uprising from the sea.”

The moral? When making comics, it really helps if your artistic collaborator instinctively recognizes the potential of your gag and turns it into a mythic moment. Thanks again for your outstanding work, Danilo!

Speaking of outstanding, NEXT WEEK’S page will blow your socks off! It’s ALL-OUT WAR, as the final battle between the whale and the Custer begins. Meanwhile, Joe’s done his part, now it is up to SCIENCE to save the ship! Make sure to RSS, Like, or Follow because the survival of the Custer might well depend on YOU!

Before I go, I want to give a shout out to our regular commenters for a great conversation on last week’s page! I purposely stayed out of it to give you guys the floor. Thanks for sharing.

As always, please vote early and often for the Daredevils at topwebcomics.com, and make darn sure to stop by the blog to check out the latest installment of the Sunday Bonus Lunch. This week you’ll learn more about the most mysterious member of The ThreeOneFive, Dan Fifield, and just why COMICS > CANCER.

Oh, and by the way, HAPPY HALLOWEEN!

*And, yeah, it’s pretty obvious that Moby Dick is a big influence, right?